Food Not Bombs co-founder Keith McHenry was born in Frankfurt, West Germany in 1957 while his father was stationed in the army there. In 1958, his family moved to Logan, Utah where his father got a job with Morton-Thiokol, testing highly destructive Minuteman intercontinental nuclear missiles. Once he attained his Masters in Zoology, his father took up a position as a ranger with the National Park Service. Keith had an idyllic childhood roaming the wilderness in America's National Parks like Yosemite, the Grand Canyon and the Everglades.

Keith's paternal great, great, great grandfather was Dr. James McHenry, who signed the United States Constitution as a delegate of the colony of Maryland, served as a general in the Revolutionary War and as Secretary of War under George Washington. He also initiated the founding of the United States military as Secretary of War under President John Adams. Keith's maternal grandfather John Vanderpoole Phelan was an intelligence officer for the U.S. Army during World War II and helped plan the fire bombing of Tokyo and the atomic bombings of Hiroshima and Nagasaki. Keith's grandfather's mother was the daughter of Carl Vanderpoole the inventor of the dynamo, outdoor lighting and the street car which he helped build in cities all over the world. His paternal grand father was ranger with the National Park Service. His father's mother had two uncles, Bob and Charlie Ford, who became famous for killing the popular outlaw Jesse James. Keith's mother Martha got her degree from Wellesley College, raised her family and ran their farm on Cape Cod.

In 1974, Keith began studying painting at Boston University and was employed part-time as a tour guide and museum curator. He also worked as a sign painter and ran a successful advertising firm in Boston with clients such as The Boston Red Sox and the Celtics Basketball team. Keith was the recipient of several Clio Awards. His anti-nuclear war street art became the subject of an Off Broadway play called Murder Now! and the film, The Sidewalk Sector.

At the same time, Keith studied with Howard Zinn and became active with the Clamshell Alliance making several trips to Seabrook, New Hampshire to protest nuclear power. He organised actions in the major cities on the east coast of the United States, and garnered his political views by taking action against nuclear arms, wars in El Salvador and the Middle East, while promoting the virtues of alternative energy and organic gardening.

In 1980, Keith and seven friends started the first Food Not Bombs chapter in Cambridge, Massachusets. At first more of a street performance than a protest, the group provided entertainment and vegetarian meals in Harvard Square and the Boston Commons after making deliveries of uncooked food to most of the housing projects and shelters in the area. After eight years of serving free food in New England, Keith moved to San Francisco where he started a second Food Not Bombs group. He was one of nine volunteers arrested for sharing food and literature at Golden Gate Park on August 15, 1988. In the following years, Keith was arrested over 100 times for serving free food in city parks and spent over 500 nights in jail. He faced 25 years to life in prison under the California Three Strikes Law but in 1995, Amnesty International and the United Nations Human Rights Commission brought about his release.

For the last twenty years, Keith has been touring the world and starting up new Food Not Bombs groups and providing logistical support to existing chapters. In 2005, he helped coordinate America's largest food relief effort organizing shipments of food, clothing and other supplies for the survivors of Hurricane Katrina. He also helped with the Sandy relief effort in New York. The FBI's Joint Terrorism Task Force has been investigating and infiltrating Food Not Bombs groups across the United States often disrupting Keith's work. ABC TV's program 20/20 claimed Keith was one of twenty people planning to destroy New York City during the Republican National Convention in 2004. He was also taken off a flight from Heathrow to Chicago by Homeland Security. As America's post 9/11 paranoia amplified, so did the number of times Keith was blacklisted by the establishment being fired from several jobs at the request of defense contractors like Raytheon Missile Systems. On a personal level, Keith suffered extreme pain every day for 19 years from fibromyalgia caused by police violence but overcame the illness after a 21 water only fast in 2014.

Keith lives in Santa Cruz, California he volunteers with the Food Not Bombs Free Skool. He enjoys tending to their gardens, sharing meals with the hungry, maintaining one of the movement's websites and helping coordinate logistics for Food Not Bombs. Keith also draws, paints, and writes about social justice issues. 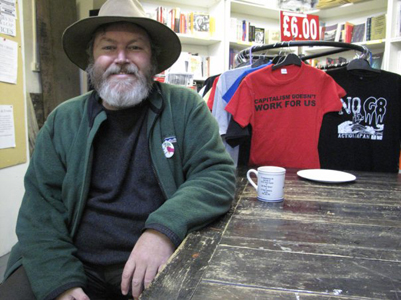 
San Francisco Police Intelligence officers stripped Keith of his clothes, lifted him by his limbs smashing him to the concrete floor of their office until his ligaments and tendons were ripped. He was pushed into a tiny cage hanging from the ceiling of their office and held in the dark for 3 days on two occasions and 4 days on a third occasion. Even so he continues to dedicate his life to supporting Food Not Bombs.

Presently, Keith focuses his attention helping provide food to families struggling because of the global economic crisis. He speaks at book stores, colleges and universities about the Food Not Bombs movement, as well as helps organize protests, and cooks with local Food Not Bombs groups as he travels. He maintains a Food Not Bombs website and provides assistance to local chapters facing arrest, seeking information or requesting literature and logistical support. He also helps the public participate with Food Not Bombs, directing hungry people and potential volunteers to local chapters that feed the hungry each week in over 1,000 cities around the world.

Accolades and credits for Keith include the 1999 Local Hero Award by the San Francisco Bay Guardian, the Resister of the Year in 1995 and the Justice Studies Association's 2012 Noam Chomsky Award. He is co-founder of the No Police Brutality Day protests and helped start Indymedia (Independent Media Centre) and the Homes Not Jails squatters' movement. He also coined the term freegan. Keith is co-author and illustrator of "Food Not Bombs: How to Feed the Hungry and Build Community." His book has sold over 10,000 copies in English, 3,000 in Spanish, 3,000 in Italian and was just published in Russian. Keith has a new book "HUNGRY FOR PEACE How you can help end poverty and war with Food Not Bombs" and "The Anarchist Cookbook" He has appeared in Amnesty International's Human Rights Report," A People's History of The United States" by Howard Zinn and been interviewed and recorded in many journals, books and several documentary films. He is currently writing another book as he tours the world speaking about the movement. Keith lives in Santa Cruz, California he volunteers at the Food Not Bombs Free Skool in Taos, New Mexico tending to it's garden, sharing meals with the hungry, maintaining one of the movement's websites and helping coordinate logistics for Food Not Bombs. Keith also draws, paints and writes about social justice issues.