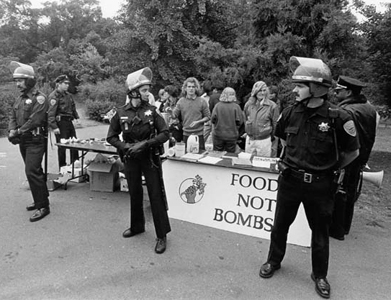 The arrests occurred when an organization called Food Not Bombs, which has served hot rice and beans every Monday, set up a food line again in defiance of a police ban.

The police gave the food to the nearby Hamilton Methodist Church which serves free meals Tuesday through Fridays, not Mondays.

The Food Not Bombs group had ignored repeated warnings and offers to find it an alternative site, Lt. Rich Holder said. He said the meals violated the health code and the park code and draw drug abusers and other troublemakers to the area.

Holder proposed serving the meals at the Hamilton church but its officials said they wish to limit their program to four days a week.

Keith McHenry, spokesman for Food Not Bombs, said his group needs a visible, public site to distribute food, obtain donations and promote its cause.